Animals and Birds for Rewilding Britain 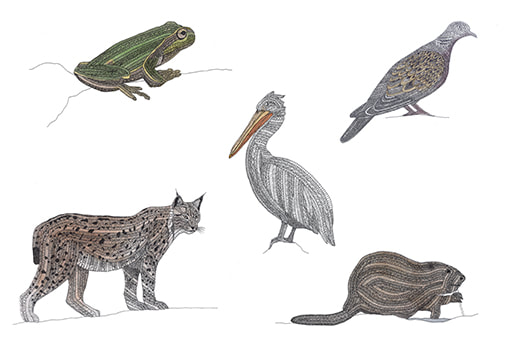 I am proudly supporting Rewilding Britain who do wonderful work in the UK to restore habitat for wildlife, encourage people to connect with nature and bring new opportunities to local communities. 40% of profits of this print will be donated to Rewilding Britain.

Rewilding Britain’s vision is to see rewilding flourishing across Britain, reconnecting us with the natural world, sustaining communities and tackling the species extinction crisis and climate emergency.

Rewilding is the large-scale restoration of ecosystems to the point where nature can take care of itself. It allows natural processes to lead the way, free from set outcomes and fixed end points. It encourages the return of threatened and missing species and embraces the ebb and flow of nature, allowing animals, plants, birds and the elements to shape our landscapes and habitats over time.

Rewilding Britain wants to see a world where we face up to the scale of destruction we’re heaping on this Earth, put an end to further degradation and start to recover what we’ve lost. It offers hope for a world where we all understand that we’re part of nature and not separate from it, that we can only thrive if nature thrives. Rewilding Britain champions rewilding and shares its expertise with anyone interested in putting it into practice, it influences policy and legislation, it helps get locally-led initiatives off the ground and it connects people and organisations, creating a broad network of rewilders and supporters.

This beautiful bird is at risk of becoming extinct in Britain - they are becoming increasingly rare following rapid and sustained population declines. This drawing was produced as a result of reading 'Wilding' by Isabella Tree. On her Knepp Estate in Sussex, the turtle dove is breeding again. I quote what they write in their website:

According to the RSPB, Turtle Doves are the most likely bird to go extinct within our shores by 2020. The decline in this lovely species over the past few decades has been catastrophic. In the 1960s there were an estimated 125,000 pairs of Turtle Doves in Britain. That number has declined 96%. In Sussex, considered one of its last strongholds, we probably have fewer than 200 pairs.

The beaver is a keystone species and one of nature’s most awesome ecological engineers. Through the building of dams, the digging of canals, and the creation of dead wood, beavers create and maintain habitats where an abundance and diversity of life can flourish. Dams prevent soil eroded from fields from being lost to the sea. Carbon and nutrients are trapped, improving water quality downstream. The flow of water is slowed, helping to ameliorate flooding.

Top predators, such as wolf and lynx, are an important part of our ecosystems. They change the behaviour of prey species through the so-called ecology of fear. Through faeces, urine or scrapes, lynx leave scent marks that advertise their presence. This keeps animals on the move, which helps to prevent overgrazing and allows tree saplings and other vegetation to establish.

These enormous birds have a huge wingspan (up to 3.5m) and were hunted to extinction by the Romans almost 2000 years ago. However, they could soon be making a comeback to Britain as the Wildlife Trusts restore and protect the wetlands needed for it to survive.

Rewilding applies to even the smallest of animals too! They are common across Europe but are extinct in the UK. Conservationists are hoping to bring them back by restoring trees, bushes and wetlands from where they went missing.